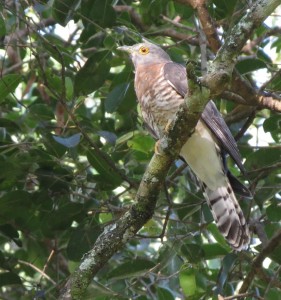 I was quite excited to hear a Common Hawk Cuckoo (Hierococcyx varius) singing early morning today (18th) in the area I live (between Nugegoda and Maharagama). It was singing loudly on a tree a few gardens away from mine. I have never noted a Common hawk Cuckoo before in this area. This is probably the first time a hawk cuckoo was heard singing quite close to Colombo.  Initially I couldn’t see the singing bird but managed to get a couple of recordings of its song. It sang for about an hour on and off and finally I saw it when it flew over my garden.

This is primarily a hill country bird. It is also found in the foot hill areas. The resident breeding population belongs to the race H. v. ciceliae. They are well known to parasitice the Yellow-billed Babblers which take care of the young ones of this cuckoo.

I believe the singing male hawk cuckoo occurred in my area should probably be a bird from the resident race. They appears to be slowly expanding their range in the country during the recent time. First occurrence of this cuckoo was noted in Kitulgala at the foothills of central hills, only a few years ago and now they have established in the area. The closest place to Colombo known to me so far where a singing bird has been noted and photographed, from a place near Horana in May 2012. In August this year there was an immature hawk cuckoo seen and photographed in Kotikawatte near Angoda. This imm. bird was not heard vocalizing while it was there for a few days. It appears that the resident birds are exploring new areas possibly to establish for breeding.

Following two sounds I recorded this morning. As the bird was singing from bit far away from where I was the recordings are with lot of background sounds.

The following two recordings of a singing male Common Hawk Cuckoo I made at Katukitula in the mid hills, between Nuwara Eliya and Gampola, in January 2003, featured hear for comparison due to their better quality in sound.The first (‘sound 3’) is the primary song and the second (‘sound 4’) is at times followed by the first in singing, and is also sung by a male hawk cuckoo as a threatening song towards other singing male cuckoos in the area. 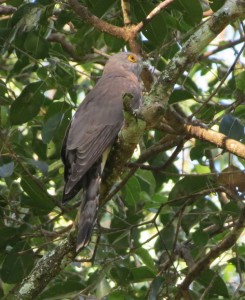