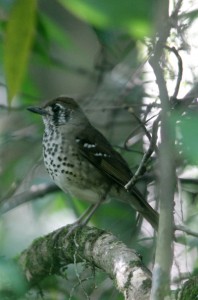 This March I spent several days bird watching on two occasions at Sinharaja rainforest. Every day early morning I heard Spot-winged Thrushes (Zoothera spiloptera) start singing their melodious songs as they were breeding at the time. Some already had young ones either still in the nest or fledged and hoping on the ground behind mother, calling a soft trill requesting to be fed. Males of the pairs mostly spent time singing of their beautiful songs while their females incubating on the nest or feeding young.

One evening while it was raining, not heavily though, I came across a male thrush singing on top of a small tree nearby a stream. It carried on singing despite the rain continues till late evening. I captured its sessions of singing on my new sound recorder I have been putting on test during my field visits.

At one time there was a ‘mixed-species feeding flock’ moving in the canopy above the tree where the thrush was singing, trying to find last bit of food for the day before dark.  A part of the recordings of its songs is produced below. Calls of Orange-billed Babblers and a few other birds in the flock heard in the background of the sound clip below.